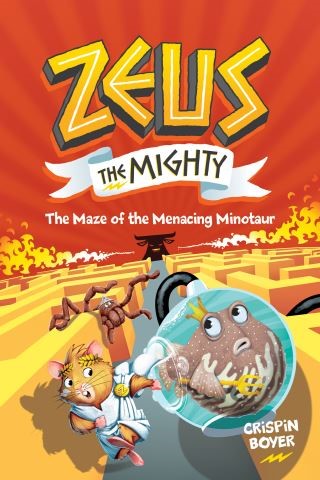 Zeus The Mighty: The Maze of the Menacing Minotaur (Book 2)

Leap into the world of Zeus the hamster and his gang of gods as they solve the mystery of the labyrinth in the second book in this hilarious modern-day take on Greek mythology.

Our story begins in the depths of a winding labyrinth, the domain of a fearsome Minotaur who threatens all who live on Mount Olympus. Can Zeus the Mighty save the day?

The critters are back and on the quest of a lifetime! Join Zeus the overconfident hamster, Athena the wise cat, Ares the treat-loving pug, Poseidon the proud pufferfish, and Demeter the loyal grasshopper in this laugh-out-loud adventure.

Welcome to Mount Olympus, a pet supply and rescue center that sits high atop a hill in Athens, Georgia. By day, the pets there do what all pets do: Chew on a bone or curl up for a catnap. Under the careful watch of their Greek history obsessed caretaker, Artie, the pets listen in to her favorite podcast, Greeking Out, each night. But under the cover of nightfall, Zeus and his cohorts spring free from their cages and pursue quests bestowed upon them by the magical all-knowing Oracle of Wi-Fi. And once again, she has spoken: There's a threat in Mount Olympus Pet Center, and it's going to take guts, smarts, and strength to triumph. Join Zeus and his friends on this rollicking romp through a winding labyrinth (the center's duct system) and Greek mythology.

Crispin Boyer: CRISPIN BOYER lives in Xcalak, a small fishing village in Mexico, where he writes about history, wildlife, and technology. He and his wife live with their flock of hens, a turkey, two roosters, and a guard goose.

His 2013 cover story for National Geographic Kids magazine, Return of the Missing Lynx, won an Eddie Award for Best Single Article, Youth/Teen. The American Library Association chose his book This or That? as one of 2015's top picks for reluctant young-adult readers.