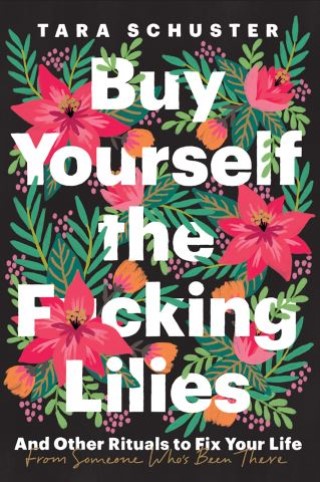 Buy Yourself the F*cking Lilies

And Other Rituals to Fix Your Life, from Someone Who's Been There

Brutally honest, often hilarious, hard-won lessons in learning to love and care for yourself from a young vice president at Comedy Central who was called “ahead of her time” by Jordan Peele

“Compelling, persuasive, and useful no matter where you are in your life.”—Chelsea Handler, #1 New York Times bestselling author of Life Will Be the Death of Me

“A bracingly honest, funny read . . . like Wild meets You Are a Badass.”—Adam Grant, #1 New York Times bestselling author of Give and Take, Originals, and Option B

By the time she was in her late twenties, Tara Schuster was a rising TV executive who had worked for The Daily Show with Jon Stewart and helped launch Key & Peele to viral superstardom. By all appearances, she had mastered being a grown-up. But beneath that veneer of success, she was a chronically anxious, self-medicating mess. No one knew that her road to adulthood had been paved with depression, anxiety, and shame, owing in large part to her minimally parented upbringing. She realized she’d hit rock bottom when she drunk-dialed her therapist pleading for help.

Buy Yourself the F*cking Lilies is the story of Tara’s path to re-parenting herself and becoming a “ninja of self-love.” Through simple, daily rituals, Tara transformed her mind, body, and relationships, and shows how to

• fake gratitude until you actually feel gratitude
• excavate your emotional wounds and heal them with kindness
• identify your self-limiting beliefs, kick them to the curb, and start living a life you choose
• silence your inner frenemy and shield yourself from self-criticism
• carve out time each morning to start your day empowered, inspired, and ready to rule
• create a life you truly, totally f*cking LOVE

This is the book Tara wished someone had given her and it is the book many of us desperately need: a candid, hysterical, addictively readable, practical guide to growing up (no matter where you are in life) and learning to love yourself in a non-throw-up-in-your-mouth-it’s-so-cheesy way.

Tara Schuster: Tara Schuster is vice president of Talent and Development at Comedy Central. She is the executive in charge of Lights Out with David Spade, and was the executive in charge of the Emmy and Peabody Award–winning Key & Peele and the Emmy Award–winning @Midnight. Her numerous other shows included Another Period, Not Safe with Nikki Glazer, and Hood Adjacent. Her plays have been performed in the New York International Fringe Festival and her writing has appeared in The New Yorker online. She lives in Los Angeles.