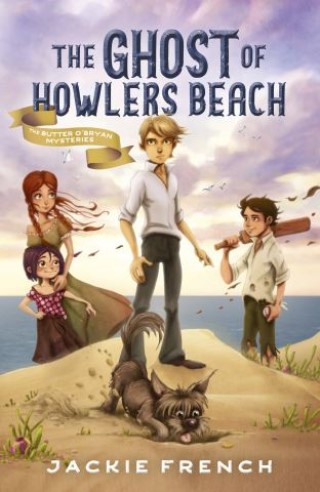 The Ghost of Howlers Beach (The Butter O'Bryan Mysteries, #1)

Butter O'Bryan has been told there are ghosts on Howlers Beach, but are there?

And even though Butter is only twelve years old, and the grandson of one of Australia's most successful Jam Kings, he is very aware of the hardship many people are experiencing.

Butter has been told there are ghosts at the nearby isolated Howlers Beach, but are there? And how can the children Butter plays cricket with on the beach simply vanish? Who are these children and why do they refuse his help?

Butter is certain they're hiding a secret and he's determined to uncover it.

Jackie French: Jackie French AM is an award-winning writer, wombat negotiator, the 2014–2015 Australian Children's Laureate and the 2015 Senior Australian of the Year. In 2016 Jackie became a Member of the Order of Australia for her contribution to children's literature and her advocacy for youth literacy. She is regarded as one of Australia's most popular children's authors and writes across all genres — from picture books, history, fantasy, ecology and sci-fi to her much loved historical fiction for a variety of age groups. ‘Share a Story' was the primary philosophy behind Jackie's two-year term as Laureate.