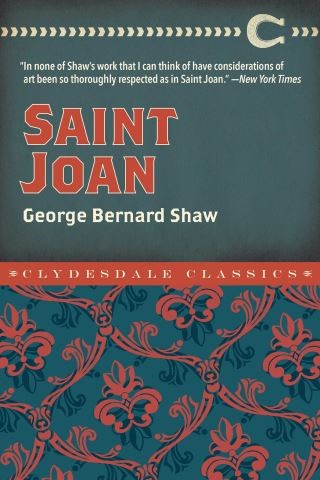 Rediscover the story of the inspirational Saint Joan of Arc with the classic play by George Bernard Shaw.

The historical saint begins her story as a simple country girl in fifteenth century France who is inspired by visions from God to help liberate her country from the English. She secures soldier’s clothing and convinces the soon-to-be king, Charles, to begin battling for his country.

Though her regiment succeeds in battle after battle, her enemies (the English) move against her. When Joan moves to liberate Paris from the English control—against the advice of her friends—she is captured and tried for heresy. Despite help from a Bishop and the Inquisitor, who truly want to see Joan succeed, her beliefs simply do not match with the Church; people do not hear visions from God, only from the church, therefore Joan must be possessed by demons. Subsequently, Joan is sentenced to death.

Now read this beautiful new edition of the talented George Bernard Shaw’s play, Saint Joan. Discover why the Catholic Church made this young woman into one of the most famous saints known today.

George Bernard Shaw: George Bernard Shaw was interested in music, art, and literature from a young age. After his attempts at writing novels failed miserably, Shaw went on to be a theatre critic with the Saturday Review in 1895. He soon started writing plays for the English stage, starting with the scandalous Widowers’ Houses. Shaw is now known as one of the greatest playwrights in history, his most successful work being Pygmalion (1912), which was later adapted into the musical My Fair Lady, with the Broadway version (1956) starring Julie Andrews and the movie version (1964) starring Audrey Hepburn.