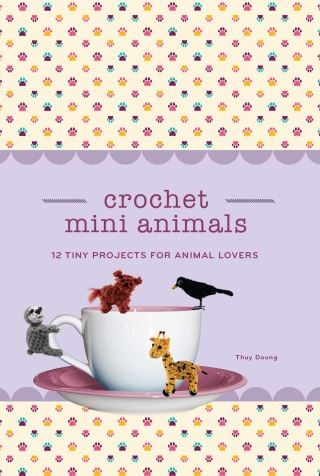 Crochet these tiny projects to add to your miniature collection!

Thuy Duong: Thuy Duong lives with her daughter in Phan Thiet, on the coast of southern Vietnam. When she was 10 years old, she became intrigued by tiny crochet hooks and wanted to learn how to crochet. Duong taught herself to crochet by taking apart crocheted hats and re-creating them. Through the years she usually worked with worsted weight yarn as there were few materials available in Vietnam. In 2014, due to her daughter’s interest in baby animals, and not having enough time to crochet larger animals, Duong began designing miniature amigurami animals. In 2016, she set up her Etsy shop under the name of Vinamigurumi. In addition to many more miniature animals, Duong’s site offers unique crocheted dolls with a variety of beautiful doll fashions. Her site also offers designs for crocheted super heroes, flower arrangements, Christmas characters, and mythical creatures.