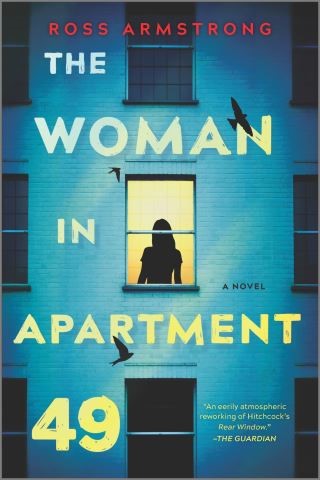 The Woman in Apartment 49

Lily Gullick lives with her husband, Aiden, in a brand-new apartment opposite a building that has been marked for demolition. A keen bird-watcher, she can’t help spying on her neighbors.

Until one day Lily sees something suspicious through her binoculars, and soon her elderly neighbor Jean is found dead. Convinced of foul play, she knows she has to act. But her interference is not going unnoticed, and as she starts to get close to the truth, her own life comes under threat.

But can Lily really trust everything she sees?

Ross Armstrong: Ross Armstrong is an actor and writer based in North London. He studied English Literature at Warwick University and acting at RADA. He's performed on stage with the RSC in shows such as Oppenheimer in the West End and with the Donmar in Hamlet on Broadway, as well as numerous TV appearances including Foyles War, Jonathan Creek, Mr Selfridge, DCI Banks and the upcoming series of Ripper Street. The Watcher is his first novel.