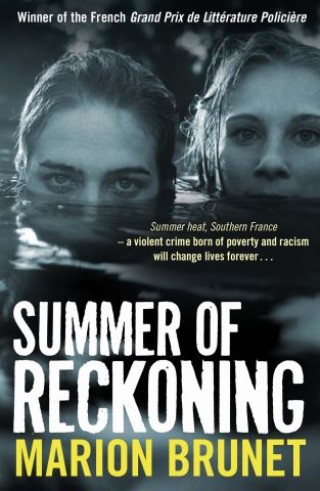 1. Winner of the prestigious French mystery prize 2018 Grand Prix de Littérature policière. Won previously by The Killer Is Dying by James Sallis, Black Cherry Blues by James Lee Burke and The Cove by Ron Rash, among others. The novel was also selected by Paris-Match as one the best five mysteries of 2018.

2. Summer of Reckoning is set in rural France but is topical and relevant to US readers. It is a novel about the “deplorables”, to use an unfortunate Hillary Clinton tag, those who feel left behind; the “petits Blancs” as they say in France, or white trash in our insulting parlance. The “petits Blancs” would not be surprised by the people in J.D. Vance's Hillbilly Elegy or in the TV series Ozark with its similar contrast between obscenely wealthy visitors and a struggling local population. It’s also topical in shedding some light on the present-day “yellow vests” protests in the streets and highways of France.

3. This novel will speak to women in this era of disclosure of male violence. The book can be like a violent slap in the face, assaults akin to those received by the two protagonists, Joe and Celine. In their world young women are routinely slapped on the backside by fathers and their friends: “it was a fun gesture, a sign of approval, a way of saying ‘you have a future’, halfway between a caress and a tap on the rump of a mare.” And women are the frequent subjects of beatings: “slaps aren’t enough, they’re never enough for women.”

4. Extraordinary writing: Brunet uses her tense and efficient crime novel--written with chilling acuity--to tell us a story of “people at sea, on a boat punctured just above the waterline, never far from a shipwreck”. No one describes better the poisonous claustrophobia of families trapped in small rural towns, where misery engenders only more misery. She writes with a scalpel about couples, family, sexism, racism and poverty. All in wonderfully fierce prose.

5. Insight into adolescence. Brunet is a well known and prize-winning YA novelist and so no stranger to the travails of adolescents growing up. This is her first novel addressed to adults but, with its intriguing teenage protagonists, it should easily find an audience among younger readers. Brunet reveals the raw truth of adolescent life, the secrets of two children who have grown up too quickly. Both ultimately loyal and courageous. See Julia Garner as Ruth Langmore in Ozark.