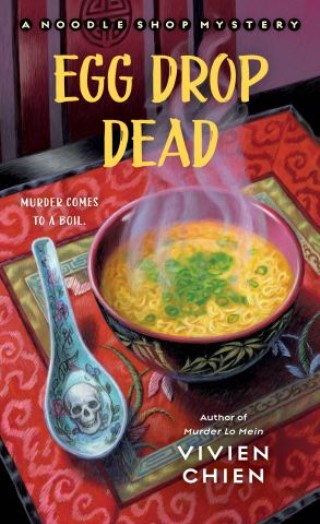 In the fifth in Vivien Chien's Noodle Shop delectable mystery series, Egg Drop Dead, the Ho-Lee Noodle House takes its business to the next level—only to end up in hot water.

It was supposed to be a fancy, intimate dinner party by the pool. Instead, Lana Lee’s first-ever catering event turns into full-course madness when a domestic worker is found dead. Is the party’s host Donna Feng, the sweet-and-sour owner of the Asia Village shopping plaza where Ho-Lee is situated, somehow to blame? That’s what Lana—whose plate is already plenty full with running the restaurant, pleasing her often-disapproving mother, and fretting over her occasionally-serious boyfriend Detective Adam Trudeau—must find out.

Before the police arrived at the crime scene, Donna had entrusted an odd piece of evidence to Lana: a thumb drive shaped like a terra-cotta soldier. Now it’s up to Lana to lead her own investigation, digitally and in real life, into a world of secrets involving Donna’s earlier life in China, whether the victim had a dark agenda, and if the killer is still out there. . .and plans to strike again.

Vivien Chien was born and raised in Cleveland, Ohio where she grew up in a mixed-race home, making for some very interesting cultural experiences. She found her love of books and the written word at an early age while writing short stories about her classmates in elementary school. Currently, she writes side-by-side with her toy fox terrier who refuses to sit anywhere else. When she’s not writing, Vivien enjoys frequenting local Asian restaurants, frolicking in the bookstore, and searching for her next donut.

She is the author of the Noodle Shop Mystery series, including Death By Dumpling.