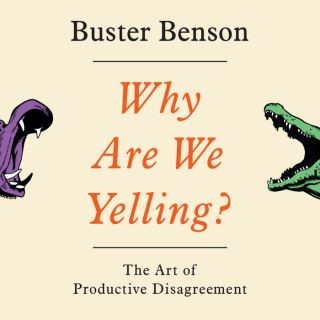 Why Are We Yelling?

The Art of Productive Disagreement

Have you ever walked away from an argument and suddenly thought of all the brilliant things you wish you'd said? Do you avoid certain family members and colleagues because of bitter, festering tension that you can't figure out how to address?

Now, finally, there's a solution: a new framework that frees you from the trap of unproductive conflict and pointless arguing forever.

If the threat of raised voices, emotional outbursts, and public discord makes you want to hide under the conference room table, you're not alone. Conflict, or the fear of it, can be exhausting. But as this powerful book argues, conflict doesn't have to be unpleasant. In fact, properly channeled, conflict can be the most valuable tool we have at our disposal for deepening relationships, solving problems, and coming up with new ideas.

As the mastermind behind some of the highest-performing teams at Amazon, Twitter, and Slack, Buster Benson spent decades facilitating hard conversations in stressful environments. In this book, Buster reveals the psychological underpinnings of awkward, unproductive conflict and the critical habits anyone can learn to avoid it. Armed with a deeper understanding of how arguments, you'll be able to:

Why Are We Yelling will shatter your assumptions about what makes arguments productive. You'll find yourself having fewer repetitive, predictable fights once you're empowered to identify your biases, listen with an open mind, and communicate well.